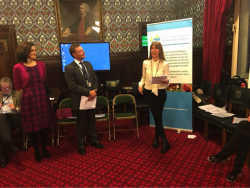 Today our inspector Nicola gave a talk at the “End Live Exports Parliamentary Reception” held at the House of Commons. The event was attended by over 50 MP’s along with celebrities and other animal welfare organizations. Nicola spoke about the ongoing problems we continue to see during the long distance transport of animals.

A debate is to be held in UK Parliament on 26th February to discuss either restricting or even banning the trade from the UK. EonA is playing a vital role in this discussion as we are one of the few organizations that works in the field and can present details on the reality of the trade for the animals involved.

Eyes on Animals has filed an enforcement request with the minister of farming, nature, and food … END_OF_DOCUMENT_TOKEN_TO_BE_REPLACED