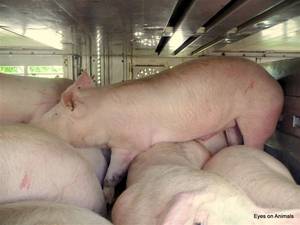 Keus en Mollink is well-known for frequently violating the EU animal-protection-during-transport legislation. Eyes on Animals has seen several dozens of complaints made against this company from officials in foreign countries and from our colleagues at Animals’ Angels. Therefore, when we spotted a Keus en Mollink livestock truck, loaded with “slaughter” pigs on the highway in Germany, we decided to inspect it. The driver was at least cooperative with us, but this did not help the animals on board: the water system was not on, and when EonA asked the driver to turn it on it took him 15 minutes to figure out how it worked. 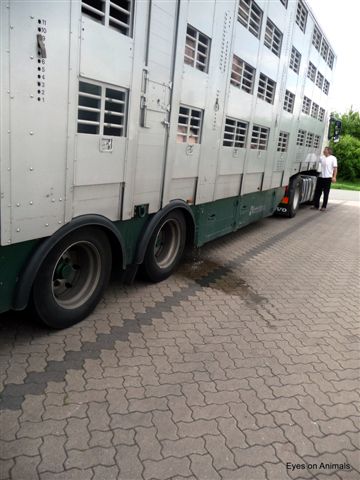 Once he got it working, it became evident that it was broken, as tons of water was flowing out onto the road instead of via the nipples for the pigs. As well, the animals appeared very crowded, with many having no choice but to lie on one another. The pigs were all destined for a slaughterhouse in Hungary. Unfortunately the two remaining German highway police offices before the Polish border did not have the man-power or time to come out and conduct an official inspection of the truck thus we had no choice but to let it go. We will send our report and photos to the Dutch Ministry of Agriculture and make a formal complaint about our observations today.