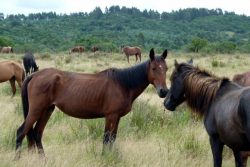 The European Parliament wants to ban the import of the livestock medicine Pregnant Mare Serum Gonadotropin (PMSG), for which pregnant horses are deprived from their blood. The Party for the Animals’ proposal to amend EU legislation to such extend that PMSG and other such ‚medicine‘ is no longer welcome in Europe, was broadly supported by the European Parliament.

Together with our partners Animal Welfare Foundation and TSB Zurich, Eyes on Animals has revealed the gruesome circumstances under which horses in Uruguay and Argentina suffer for the production of the hormones in the  livestock industry of the Netherlands and other countries. We are very thrilled that our investigation has led to this result. It is however up to the  European Commission, the daily EU government, to accept the European Parliament’s request and to ban the import of PMSG and other problematic livestock medicine. We will try to keep up the pressure to ensure this happens.

See an article about the parliamentary vote HERE.