Eyes on Animals was invited to this conference by EU-contacts who are responsible for animal transport. In the Netherlands NVWA is the organisation that handles these transports and likewise every member of the EU has its own department. 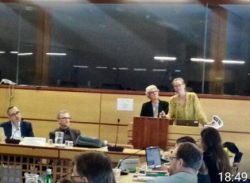 We gave a presentation in which we suggested improvements that need to be installed, or already have been installed, in livestock trucks, in order for them to be suitable for the kind of animals that are to be transported. During our inspections of livestock transports in the Netherlands and beyond, we regretfully often encounter deplorable situations, that are within legal limits though. We showed pictures of such circumstances, often a failing water supply, a lack of adequate fencing between the animals, the impossibility of reaching the animals during transport(no access doors), the transportation of unweaned calves and lambs, animals that are not suitable for transportation over long distances, because they cannot drink unaided. We also made a special point of the catching and transportation of poultry.

Of course we mentioned the trucks that actually have been improved, whether or not monitored by Eys on Animals. There are some companies Eyes on Animals have good work-relations with, like transport company Hunland and truckdesigner Pezzaioli. We hope our presentation clarified the importance of checking on livestock trucks and we hope the audience realizes the importance of careful consideration of what kind of animals are being transported before the livestock trucks are issued an approval. It could mean a great contribution to safer transport circumstances for the animals and could prevent injuries and even death.

We are grateful for the invitation and the opportunity to speak about this subject.