On Monday evening – for the first time in The Netherlands – the company “Rondeel” chose to catch and load an entire flock of their 3500 birds with us using the much more humane “EonA Dutch method”. Normally, chickens are grabbed by their legs (3-5 per hand) and then stuffed headfirst into transport crates. With the EonA Dutch method, the chickens are picked up a maximum of two at a time, in an upright position with support under their chest and then placed upright and calmly into the transport crates. There is a great deal less stress and pain for the birds when this method is used. 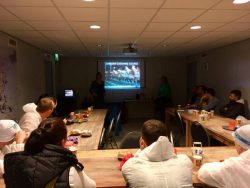 Prior to catching we held an interactive presentation to the 16 catchers of Den Ouden Oirschot chicken-catching company. In the presentation we showed several photos and videos we had taken during our inspections of catching and loading at poultry barns. Together with the catching team we analyzed the images to see what could be improved and areas where additional attention was required. Bird behavior and anatomy were the basis to illustrate the problems. The catchers were apprehensive at the beginning but it did not take long before they opened-up and enthusiastically and actively participated in the discussions.

At the end of the presentation we briefly discussed the design of poultry transport crates and containers. Design mistakes can cause huge animal welfare problems, for example body parts getting stuck, heads getting crushed and other injuries. The catchers were motivated to propose changes to the current designs and gave us helpful feedback, which we will pass on to companies that build these crates and containers.

Pilot catching chickens at Rondeel farm
The catching of the birds went very well. The first thing we noticed is that the catchers were very quiet. There was no yelling, loud talking or running in presence of the chickens, which is important to keep the flock calm. The catchers were also positively surprised about the EonA Dutch method. It went faster, and was quiet and smoother than they thought. They also liked it that we helped them with catching the birds the EonA Dutch way, instead of only observing. The collaboration went very well.

Of course careful handling is also crucial when using the EonA Dutch method, for example, the birds must be put into the crates gently and not thrown in. Luckily the team leader of Den Ouden was very enthusiastic and attentive, such a role model is really important for a catching team.

Also Rondeel was very positive about the evening. They are going to check if they can make some adjustments in their stables to increase the catching speed and improve animal welfare even further. For example Rondeel will experiment with the birds by allowing them to sleep on the floor the night before the catching team arrives. If birds sleep on the floor it is easier to catch them and the risk of injury is decreased as there is less chance birds will bump against racks or other objects. There is also less chance that the catchers need to pass the chickens from one person to the next.

After all 3500 birds were loaded, the catcher from Den Ouden continued catching the chickens in the rest of the Rondeel barn. For these chickens the regular “commercial” method was used. It was at least good to see that the catchers immediately put our tips into practice on how to reduce some of the stress within the commercial method: when they caught the birds by their feet with one hand, they supported their breasts with the other hand instead of leaving them hanging upside down. By supporting the chickens under their breast a big part of the suffering caused by inversion is prevented.

The goal is that animal-welfare food labels, like Rondeel, Demeter and Beter Leven, in the near future will include criteria for humane catching and loading of birds and the EonA Dutch method will become the standard.

We want to thank Rondeel and Den Ouden Oirschot for this constructive and positive evening whereby we all learned a lot and joined hands to reduce animal-suffering. We would like to also congratulate them for being the first company to test the EonA Dutch method out on a bigger scale.