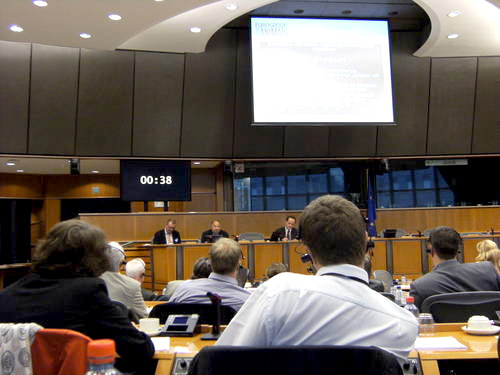 Eyes on Animals and WSPA were invited to the European Parliament in Brussels to present their report on the weaknesses in the animal-transport monetary sanctions.

The focus of this special meeting, held by the Animal Welfare Intergroup, was on farm-animal transport and the enforcement of the EU- legislation EC 1/2005. Representatives from the transport and food industry, veterinarians and NGO’s informed members of the European Parliament about the current situation. While the transport and food industry focused on the improvements since the introduction of the EU-legislation 1/2005, other speakers expressed their concerns about the poor enforcement of this law and the great differences in the monetary sanctioning systems in the EU.There was a great appeal to the EU- Parliamentarians to collectively agree on solving this urgent matter. The Commissioner M.Dalli received a letter containing a request for establishing a permanent Committee. The task of this Committee would be to monitor and improve the enforcement of the animal transport legislation.

The Eyes on Animals and WSPA report, titled “Weaknesses in the animal-transport monetary sanctions” was presented and distributed during this meeting. In our report, it is made clear clear that many Member States still cannot sanction certain violations of the provisions of the European animal protection during transport legislation, that sanctions are often so low they defeat their purpose and that foreign perpetrators are too often getting away scot-free. We are insisting that the EU scrutinize the monetary sanction system of each Member state to see if they are effective, dissuasive and proportionate.

This film is being shown on BBC 2 this Sunday at 2230 By documentary maker Andrea Arnold. The story of Luna over a period of 5 years at a farm in Kent.