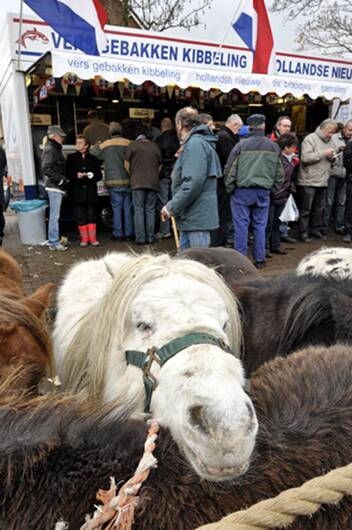 Last November 2010, Eyes on Animals inspected the Horse Market in Hedel and found a series of practices which were unacceptable. A lot of attention was given by the media to our negative observations, click HERE to read one of the articles. In May 2011, the first consultation between the Hedel Horse Market Foundation, and Eyes on Animals took place. The nVWA was also invited. At this time, a number of adjustments were discussed and Eyes on Animals made additional suggestions.

The Horse Market Foundation in Hedel and the nVWA has worked hard to make improvements for this years´ market. The municipality of Hedel has made 45,000 euros available for these proposed adjustments. Horses and ponies will be better separated from the noise and chaos of the fairgrounds and the public. Extra places will be created in the case that more animals will come than expected, to avoid that they be overcrowded. Furthermore, indoor and outdoor places will be provided for horses showing signs of discomfort or injury. Eleven watering sources will be made available, so that the animals can be watered and hay will now also be offered. The Hedel market organizers will also make regular announcements requesting the traders to make use of these places. As of midnight, at least 2 veterinarians will be walking around. At 4a.m., 3 extra veterinarians will come.

The Police, who did next to nothing for the horses last year, have become a part of the newly established supervision program. They will accompany the inspectors around the market. The nWVA will be present and possibly bring their own veterinarians with them. On this upcoming market day, the police, nVWA and Eyes on Animals will be in constant contact with each other and in co-operation with the Horse Market Hedel Foundation ( Stichting Paardenmarkt Hedel) so that any problems can be quickly solved.

Our hope is that these improvements will lead to a sharp decrease in animal suffering. We want to thank the Horse Market Hedel Foundation (Stichting Paardenmarkt Hedel) for their openness and their willingness to take responsibility for ensuring better animal welfare this year.