Today the team from Eyes on Animals, Animal Welfare Foundation and Welfarm trained the highway police in Bekescsaba, in the eastern part of near the Romanian border. Roughly 35 police officers were present. In the morning we taught the theory of the animal-protection-during transport legislation and in the afternoon we stopped trucks together. 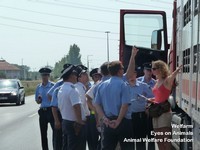 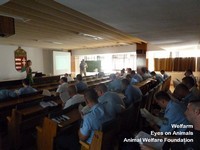 It was extremely hot outside. A truck transporting Romanian sheep for slaughter to was inspected. The sheep were loaded on 4 decks, resulting in many not having adequate headspace nor adequate air circulation above their heads. We measured the temperature inside the truck, which was 40 degrees ( 5 degrees above the EU maximum). 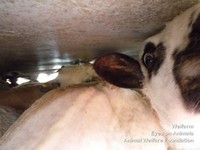 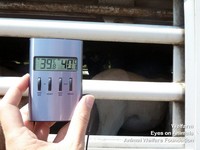 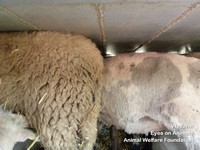 Because of these two violations (the lack of headspace and air circulation and the temperature being above 35 degrees) and because the animals still had 25-hour journey ahead of them, the police filed a complaint on the drivers’ journey log and advised the drivers to unload at the control post further south to avoid more trouble. They will send the photos and their report to the local official veterinarian authorities to take the next steps.