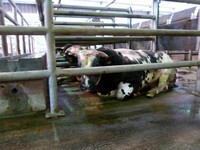 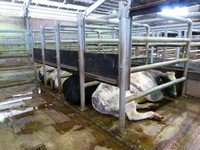 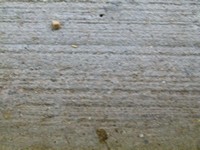 Eyes on Animals inspectors paid a visit to Euro Meat Group, a slaughterhouse that slaughters horses and cattle, on account of a transport inspection. Earlier this year, an unfit dairy cow that could not stand or walk without pain (a so-called downer) was transported to a slaughterhouse, despite the fact that this is forbidden by law and causes pain. Eyes on Animals inspectors followed the truck with the downer and received hostile reactions from the slaughterhouse people once they arrived. Our view of the unloading of the downer cow was blocked and the police were called because it was assumed that us taking photos is prohibited, even from a public road.

The slaughterhouse in question that received the downer cow, Flanders Meat Group, was closed last month because it didn’t measure up to EU regulations. We visited Euro Meat Group, because it took over the activities of Flanders Meat Group. A difference is that culled dairy cows are not slaughtered anymore, it is now mainly beef cattle and horses, so the director told us. Nevertheless, at the moment of our arrival there were dairy cows present.

We had announced our visit, but we didn’t manage to make an appointment. The director, who is also the veterinarian, did not have a lot of time at the moment of our visit, but did talk to us and quickly showed us the stables of the slaughterhouse. We didn’t see the part in which the animals are slaughtered. There weren’t any animals being slaughtered at the time of our visit. The director assured us that there are no downer cows accepted and if it does happen they are euthanatized in the truck. He did not have any explanations for the situation that occurred earlier this year. We were not allowed to take pictures, but the director emailed us some of his own pictures. We would like to return to this slaughterhouse at a moment when cattle are being offloaded and slaughtered to better judge the levels of welfare. We thank the director for making time for us after all.

Eyes on Animals has filed an enforcement request with the minister of farming, nature, and food … END_OF_DOCUMENT_TOKEN_TO_BE_REPLACED