Today the EonA/AWF team gave a Power-Point and film presentation to a team of 5 officials from the Turkish Ministry of Agriculture responsible for drafting the upcoming national legislation on the welfare of animals at the time of slaughter. 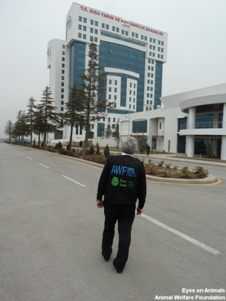 This legislation will be based on the EU legislation. The team and others have received training from the OIE to prepare them for this task. We showed them the suffering of animals inside the Turkish slaughterhouses we visited, the design flaws in the equipment and the very often rough or ignorant treatment. We however also showed them lots of positive examples taken from other plants we visited, as well as Dr. Temple Grandin’s design advice and behavioural tips and encouraged training for all slaughterhouse workers.

We stressed in particular the horrific conditions inside Aygular slaughterhouse in Kazan that we visited yesterday.

At the moment they unfortunately cannot force the closure of a plant down based on welfare reasons, as the laws have to be first put into place to give them this power (this will take up to 2 years). However, the Turkish legislation on slaughterhouse hygiene and technique will be coming into force on January 1st, 2014 so plants that do not respect these rules will face closure. They are planning on sending inspectors out in 2014 to check on all slaughterhouses in Turkey.

Although this upcoming legislation only concerns such things as sewage, temperature monitoring and disinfection… we urged them to make this slaughterhouse a priority for this inspection as well.

Eyes on Animals has filed an enforcement request with the minister of farming, nature, and food … END_OF_DOCUMENT_TOKEN_TO_BE_REPLACED