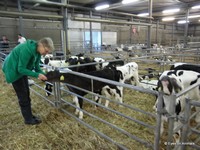 After a visit to the sheep market and the cattle-market, Eyes on Animals inspectors now visited the calf market in Leeuwarden. The market itself again made a decent impression. There was enough straw and the calves had plenty of space. The calves couldn’t drink, but the time they spent at the market and during transport does probably not exceed the legal nine hour limit. 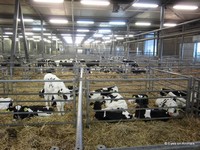 Almost all calves stood together, something that herd animals prefer. A calf that stood alone tried to climb out of the box and was put back. In general offloading went well. Most calves were pushed by their backs to get them to go to the right box. Unfortunately we noticed some pulling of tails, calves that were roughly pinched in their backs and pushed into the pens with force. There was a man who pricked the animals with a closed pair of scissors. He did not do this in an aggressive way, but a sharp object is of course not suitable to use.

The market manager and other board members were helpful with answering our questions and they again gave us the feeling we were welcome. Next time we would like to be present when the animals are loaded.

📌🐖 Changes we achieved in a slaughterhouse in Ghana. From very cruel handling (last year) to a calm approach of the pigs now. #slaughter #pigs