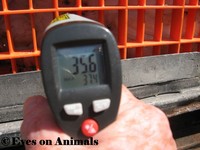 This summer, Eyes on Animals’ teams decided to inspect animal transport on extremely hot days to see if the animals were suffering from the heat. Our highway inspection consisted of two shipments of chickens and a pig transport truck. In all cases, temperatures inside the transport trucks were too high. Inside the poultry transport the temperature ranged from 33.7 to 35.6 degrees Celsius and in the pig transport it mounted to 35 degrees Celsius. This is above legal regulations for animal transport which states that temperature can be up to a maximum of 30 degrees with a tolerance of 5 degrees. The temperature was measured in the pig transport whilst stationary on a weighbridge. If they had been required to remain still for any longer, the temperature would have risen significantly.
In the afternoon, we arrived at a central gathering place where the pig truck, full of ‘spent’ breeding sows, was unloaded. Due to the heat, these animals condition was deteriorating: they were panting, their tongues were hanging out of their mouths (some were bone dry) and they were completely exhausted. Some sows could hardly stand on their legs. A particularly sad event was a sow that collapsed and died on the spot. Those responsible at the collection point did everything possible to resort tranquility and coolness, but it was a dramatic sight to see these sows in such a miserable condition. This transport came from The Netherlands, which meant that the sows had only been on route for a few hours at the most. These sows were already in such bad physical condition. They had, for their whole lives, done nothing but become pregnant and have piglets with little or no room to move. Thus the consequences of such transportation in which they must walk and then travel in trucks had had a huge impact on them. We likewise saw that many of these sows had wounds and scratches on their bodies. It is the opinion of Eyes on Animals that such shipments under these conditions should be stopped. 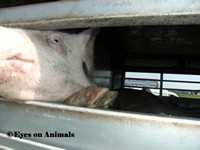 We would like to thank the reception center for their hospitality where these conditions were attended to and more positive conditions restored.

Eyes on Animals has filed an enforcement request with the minister of farming, nature, and food … END_OF_DOCUMENT_TOKEN_TO_BE_REPLACED