Eyes on Animals appreciates the open-door policy that the Dutch pig assembly station “ANIMO” has towards us. We visited, as usual unannounced, this collecting station today to observe the loading of culled-sows for slaughter in Germany and Belgium. These animals appear rather miserable after a life of reproduction, cramped housing, and genetics that favour growth and large litters as opposed to strength and good bones. It was very hot today and many of these large animals were panting rapidly. The heat, together with being mixed and moved and weighed, had the potential to lead to stress and suffering. We suggested to the workers to pour some buckets of water onto the stall floor and offer the sows a water “bath”. They did this, and the sows loved it. They rolled and splashed in the water, and then lay in it to cool off. The handling by the drivers from the company van Schipstal was calm, as was the handling by the two regular workers at ANIMO, particularly Razul. 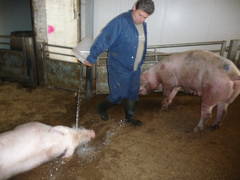 We were also happy to learn that, after our complaint back in April concerning an employee from the company Buurman (who hit and kicked a pig at ANIMO during loading resulting in the animal no longer being able to be loaded) the manager of ANIMO gave a warning to the man. We learned that the VWA and AID also inquired into our complaint and inspected ANIMO and Buurman transport afterwards. When the management is strict and professional, the workers are good and professional, as they have a role model to look up to.

Eyes on Animals has filed an enforcement request with the minister of farming, nature, and food … END_OF_DOCUMENT_TOKEN_TO_BE_REPLACED