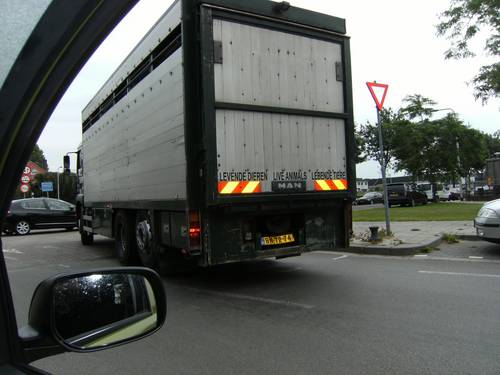 On the 5th of September 2010, Eyes on Animals discretely observed cattle trucks arriving at VION slaughterhouse in Tilburg. We saw a number of double-decker transport trucks in which the cattle had insufficient headspace. As a result, the cattle were not able to maintain their natural posture, which could in turn cause serious injury to head and back. At the time, we discussed our concerns with the director of VION Tilburg. Throughout 2010, Eyes on Animals focused its attention on inspecting many double deck cattle trucks to draw attention of the authorities for the need to give cattle more vertical space during transport. Recent research from WUR also revealed that the 10 cm rule, which transporters themselves didn’t always adhere to, lead to serious physical problems. Armed with more knowledge, the Dutch government decided that the headspace for adult bovine animals should indeed be increased to at least 25cm. In the past few months, Eyes on Animals has again done several random checks at VION slaughterhouse in Tilburg. To our relief, cattle delivered there are now given adequate headspace and never loaded on both levels of double deckers. We spoke to one cattle driver coming out of the plant and he told us that there are now very strict checks for compliance with these new regulations. Good news! We will nevertheless continue to do random checks to be sure it stays this way.