Today Eyes on Animals made an unannounced visit to the veal market in Leeuwarden (NL) where on average 600-800 calves, between the age of 2-3 weeks, are sold for further fattening. The calves were kept in groups and were provided with thick bed of straw to stand and lie on. Some of the calves were seen jumping around, enjoying their new-found freedom. The majority of the calves are not accustomed to this kind of freedom, as many come from dairy farms where their space and movement is restricted by small individual pens and igloo’s.   Eyes on Animals nevertheless did encounter several weak or sick calves (calves with diarrhea, sunken bellies, respiratory issues). In our opinion these calves should not have been sold at the market. We noted their ear tags and passed them to the market’s managing board so they can send a complaint to the farmer.

Watering
Watering was labour intensive, done by hand with the use of a bucket and trough. Because of this method, not all calves received water with electrolytes before they were transported to their destinations. We advised the board of the market to use a large mobile water tank with a hose instead of buckets and to employ more than one person for this task.

Another point of concern was the amount of time in which the calves did not receive milk, both during transport to and from the market and whilst at the market. During this time the calves will only receive water with electrolytes as the veal farmers prefer receiving the calves with empty stomachs, claiming this reduces the risks of diarrhea. Besides, this assumption has not been scientifically proven, nor endorsed by experts, it therefore means the calves aren’t receiving any milk (nutrition) for up to 1-2 days which is unacceptable for calves their age.

Age verification
Age verification is done with the use of scanners. If it is detected that a calf is under the age of two weeks the trader will receive a fine of EUR 100. The fines are imposed by SKV and encourages the trader to perform an age check before bringing the calves to the market. On average a few fines are written up each month. The age verification itself is good, but we are aware that it is seemingly easy to enter fraudulent dates of birth in the official I&R (identification and registration) system.

Overall the loading and unloading was conducted in a calm manner. We did encounter one trucker who handled the calves very roughly and we reported this to both the market’s managing board and transportation company. They both promised this rough treatment will never happen again.
Eyes on Animals followed one truck with weakened calves to its final destination, a nearby rearing farm. Both loading and unloading was conducted in a calm manner and the individual housing pens had a thick layer of straw (according to the farmer a vital necessity for weakened calves). The pens were more spacious then we usually encounter and were partly open on the sides, allowing the calves to make physical contact with each other.

Upon arrival the calves received warm water with electrolytes and the calves in need were seen to with medication and pain relief. Eyes on Animals does not approve of the trade in weakened calves. It is the dairy farmer’s responsibility to ensure that the calves in his care are transported only when they are deemed fit and healthy enough. We were however content that this particular group of calves were handled with a little more care during transport from the market and at the rearing farm. 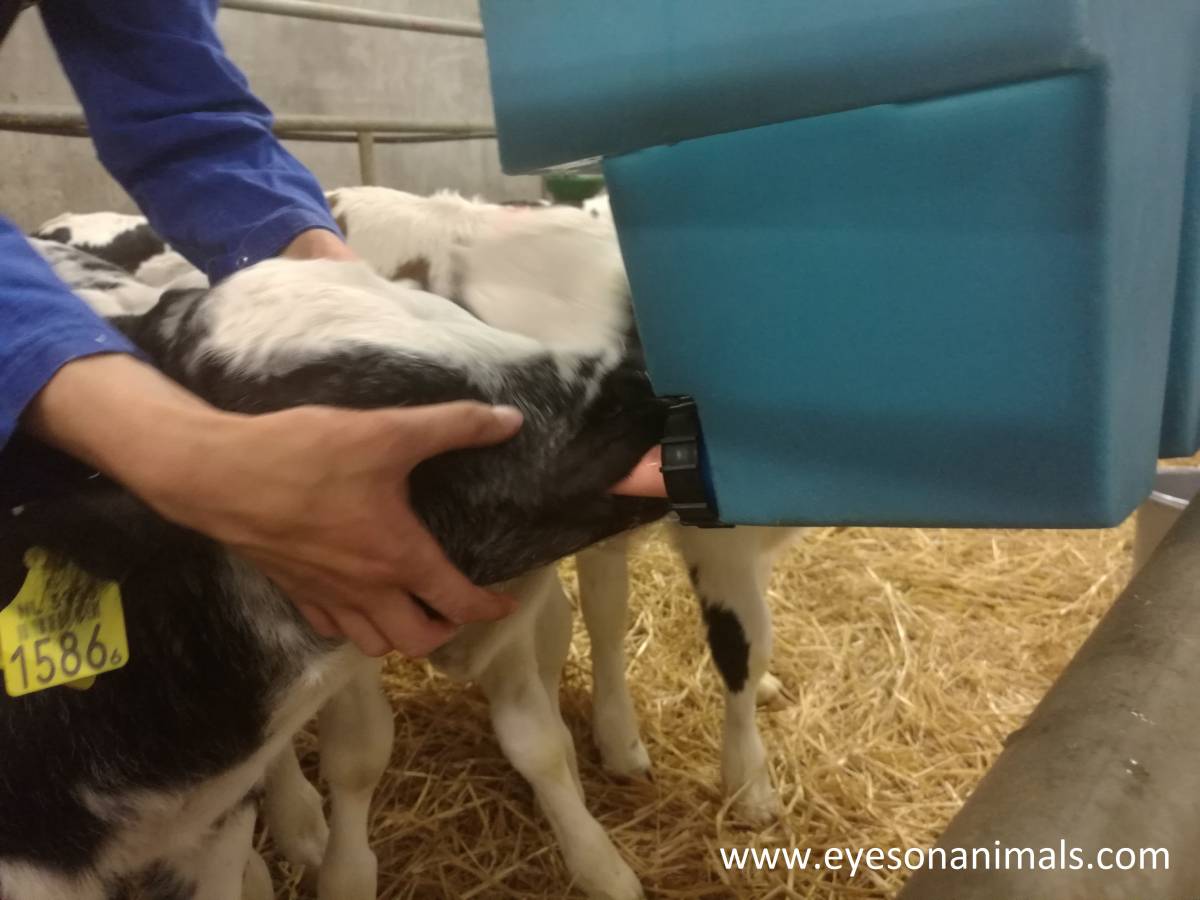 We want to thank transport company Bouma for letting us observe the unloading of the calves, the farmer for his transparency and the market’s managing board for their willingness to implement some of the improvements we suggested.