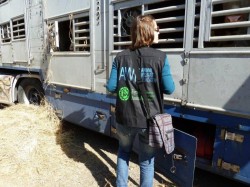 Today seven animal transports with breeding cattle from Austria and the Czech Republic pass the Turkish border at Kapikule. Our AWF/EonA team documents the transport conditions and the waiting times at the border. In five of the vehicles there is enough bedding although it is mostly quite dirty. Many pregnant heifers have lied down and are resting. In the two trucks of the Polish company Amsyl however, the amount of straw is insufficient and the floors are excessively dirty. We do not see any animals lying down on these soiled and hard floors. In most of the vehicles, the dividers are inappropriate, as they do not reach down to the floor, and pose a high risk of injury. In one of the vehicles, the ceiling height is too low and the animals do not have enough headspace. We are going to send complaints to the competent authorities.


Most transporters have already arrived at the border at 4:00 in the night. Between 14:00 and 15:30 they pass the Turkish border and drive to the nearby feeding station. None unloads the animals, but at least they are watered and fed on board of the trucks. The drivers of one of the Amsyl transporters water the cows manually with buckets. They tell us that the drinking system of the vehicle does not work well. The animals seem to be very thirsty and are fighting for water.
On one of the vehicles we find a cow which is panting heavily. The Turkish official veterinarian, who has inspected the truck inside the border, has noted this and ordered that the cow be unloaded and treated by a veterinarian. The rear compartment in which the cow is in is unloaded at the feeding station. A veterinarian from the nearby town Edirne is shorty on the spot and inspects the cow. He finds that she has high fiver and gives her antibiotics and an anti-inflammatory drug. The veterinarian decides that she is fit enough for transport, also because the place of destination is only 300 km away, and the sick cow is reloaded onto the truck together with the others.
Five of the transporters drive on in the evening. The pregnant heifers still have another 300 to 1’400 km ahead of them. Two of the vehicles are not allowed to continue their journey and we are told that the buyer of the animals has not yet transferred the import duty. This situation is aggravated by the fact that the sick cow is on board of one of these trucks. 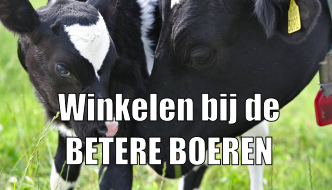